Just getting started in Astrophotography?  Please check out my introductory article, ‘Astrophography – Seeing the Light in the Darkest Places’ first before you dive in here.  It’s been recently updated for 2017!

Astrophotography is a wonderful, and at the moment wildly popular, style of photography. From the peace that comes from sitting in the still darkness taking in the sights of the night sky, to the wonder of seeing far more than the eye can behold light up the back side of your camera’s screen after each click – there is much to enjoy and explore in the night. It allows you to unlock your creative mind to the endless possibilities that come with the setting sun, but also brings with it endless challenges as well. One of those challenges is understanding and then choosing the best lenses for night photography. The rule book, seems to change just a little once that sun goes down. Let’s see if we can fill in a few of those new rules so you’re better armed the next time you step out under the stars with the aim to capture them all.

But First, an Introduction on Lenses

A quick refresher for some, but to ensure we’re on the same page once the sun sets and the stars come out, a few words on lens construction and their specifications.

Focal Length (in mm): the distance from the point where light rays converge to form a sharp image of an object to the sensor. Thus, it’s not the length of your lens, but the distance between where the light being gathered by your lens converges to be in focus to the sensor that is capturing the image. For our discussion, the most important thing to remember is that the bigger the number, the smaller the field of view. All of the light that will be captured by your camera’s sensor comes from this field of view.  This is important when dealing with star fields where the actual light comes from small points across an otherwise very dark expanse.

Physical Aperture: the physical diameter of the opening through which light passes through the lens and onward to the sensor. Think of this like a pipe, the larger the diameter of the pipe, the greater the volume of water (or in our case light) can pass through. This is also known as the Clear Aperture Size.

Using f-stop to compare lenses works great – If, and only if the light entering the lens is relatively uniform in intensity. During the day, outdoors, and especially under soft overcast skies, this holds true. Where it does not hold up is when suddenly the entire sky is black, save for a small number of very small bright points of light we know as stars. In this case, you have to throw that f-number out the window, it is quite useless to us when comparing what lenses are best to capture the stars and other dark sky objects.

Under the stars, what we care about is the Physical Aperture, the size of the pipe. Because the light comes from such a small percentage of the sky, a ratio of how much sky we see to the the amount of light being pulled in across the entire frame doesn’t mean a lot. Especially when we’re particularly interested in a small area of the sky such as the core of the Milky Way for instance. What we really care about is how fast we can pull light from a single star in through the lens and deposit it onto the sensor of the camera. The faster we can do that, the shorter our exposure times can be, and the lower we can keep the ISO of the camera – resulting in less of that dreadful noise.

So the answer is simple, what you want is a 100mm f/1 lens right? A little big and a little clunky and a tad expensive? There’s the 85mm f/1.4 then! That would pull in light amazingly fast! And this is true, with a Clear Aperture of 61mm it gathers light at more than three and a half times the speed of a 24mm f/1.4 lens.  A little panoramic stitching and you’d have the best astro shots ever seen! The problem is, the earth spins.  Thus, from our perspective standing on earth, the stars move. The longer the focal length of the lens the more this movement is amplified.  You have only a few seconds with that 85mm lens before the stars turn to streaks.  As with almost anything, a balance must be found – or more equipment must be purchased!

Let’s assume you don’t want to spend in the neighborhood of three hundred to over a grand for a tracking mount, and then spend the time to set that up each shot, and deal with the fact now your ground is moving instead of the sky. What you want the best untracked astrophotography lens you can get your hands on. The amazingly informative guys over at LonelySpeck.com have developed a great formula for determining the rating of a lens so that they can easily be compared for their light gathering ability vs focal length. What we’re looking for is the biggest aperture for the shortest focal length. I’ll let LoneySpeck get the glory on this one for the full list check it out here: Lenses for Milky Way Photography, but here is how a few notable common options stack up (my current favorites in bold):

UPDATE! Samyang (aka Rokinon) has announced a new ‘Premium’ line of lenses including an interesting new 14mm option – with a faster f/2.4 aperture.  Doing a few quick calculations shows that this faster lens’s rating gets a major boost over it’s (much cheaper) older cousin. 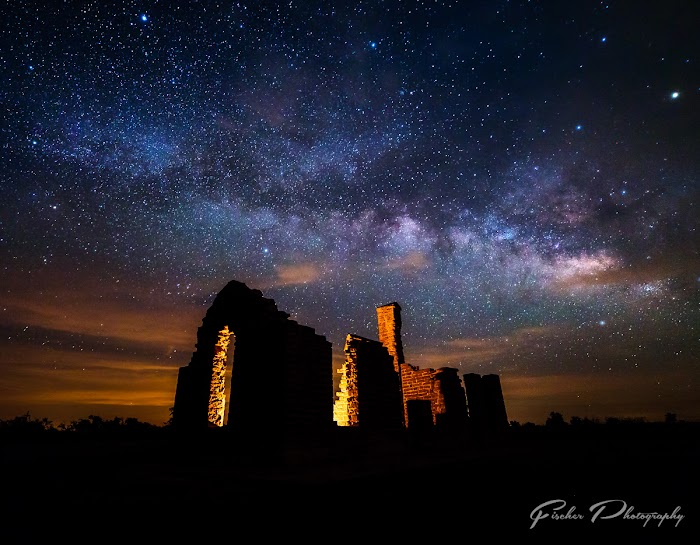 Looking at the numbers above one thing surprised me, the slightly higher rating for the 12mm f/2.8 vs 14mm f/2.8 lens. The 12mm is soon to be released by Laowa as a full manual Full Frame lens and currently in production by a couple other makers for APS-C sensor systems, and I was recently discounting it as a less ideal option to the 14mm, yet it has a higher rating. The reasning is that LonelySpeck’s ratings taking into account the longest untracked exposure time possible with each lens. With the 14mm lens it’s around 36 seconds on a full frame, where the 12mm you could allow the exposure time to grow to 42 seconds before trailing becomes evident. However, there’s a catch, and it’s the catch that has already resulted in me leaving my 14mm in the bag and picking up my 24mm more and more often.  At focal lengths of 14mm and wider, the core of the Milky Way becomes a much smaller element within the frame.  To me, astrophotography is about impact, making the night sky pop and jaws drop. Showing the viewers a sight they have never seen with their own eyes, and when the core of the Milky Way is this small band of color in an otherwise dark sky, I feel a lot of that impact is lost. Another consideration is that setting up compositions where ultra-wide lenses really work is difficult, you really must have an extremely strong foreground for it to work well. This is easier said than done in the middle of the day – under the cover of dark, without a lot of trial and error – the wider lenses can lack the foreground impact as well.

** As noted in the ‘Update’ above – Samyang has announced the XP line including a f/2.4 version of their 14mm offering.  Not sure how widely available these lenses are just yet, but as 2017 progresses hopefully they’ll be a more readily available (though expensive) option. 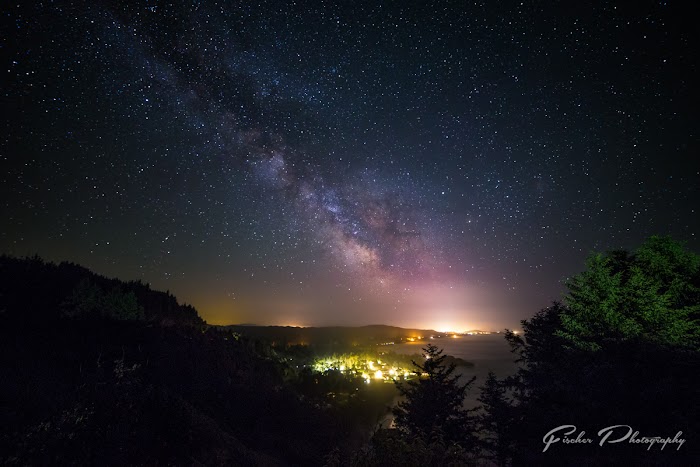 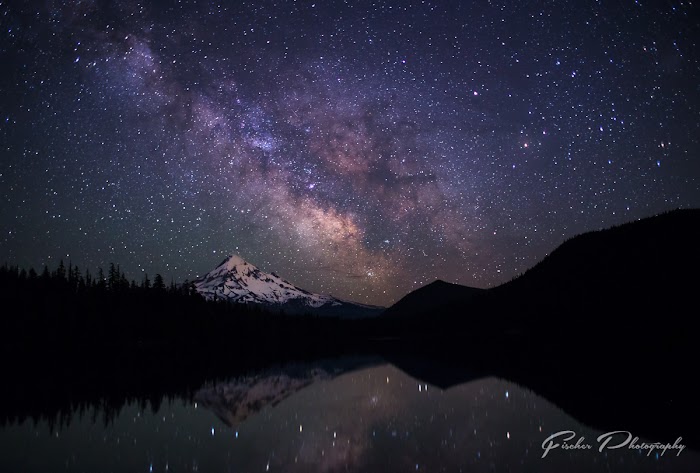 On the flip side, when you start venturing into lenses of 35mm and beyond, the opposite problem starts to occur, you can’t get enough of the night sky in the frame to have anything but the night sky with the Milky Way through it. Finding just the right spot to get a good foreground with the Milky Way situated directly behind it takes a lot of planning or even more luck. An exception here is I’ve seen some interesting star trail shots with longer focal lengths and is an option I’m personally looking forward to experimenting with in the future.

Tired of sections titled “The Catch”? Promise this is the last one, and it’ll be a short one at that. Full Frame camera users can skip right over it as well, but for my friends using crop body cameras a final note – be mindful when comparing lenses that are made for Full Frame vs Crop Body camera systems. Don’t fall into the trap of thinking you somehow need to convert numbers for Full Frame glass to compare it to your APS-C only glass. All the numbers hold, a 12mm f/2 lens is going to be a better option for you than a 14mm f/2.8 even if it’s half the size. A 24mm f/1.4 lens is going to put down the same amount of light from the same star as the lens on the front of a full frame camera. Only difference is that your smaller sensor is going to make that star seem larger on the resulting photo because it covered a larger percentage of the frame. It’s no different than if I cropped down my full frame shot to your field of view. This stuff is complex enough as it is, don’t make it any more so than you have to.

Where to go from Here?

I’d like to tell you that light gathering power is the only consideration when choosing a lens for astrophotography. Unfortunately, it’s not that simple. Not every lens of the same focal length and aperture are built the same. And thus, they do not all render that light that is gathered through the lens in the same way – especially at the edges. Coma and Astigmatism are both enemies of the astrophotographer, turning the nice round points of star light into ovals, crosses, and other non-circular shapes. These flaws in lens rendering of course are most pronounced at the lenses maximum aperture, exactly where we want to be shooting in order to have the biggest possible pipe. Having to stop down a 24mm f/1.4 lens down to f/2 takes its rating from that powerhouse number 2,834 down to 1,406. Some of the best performing day-time portrait lenses, lenses that share that important fast aperture, also fail when it comes to these sorts of edge of frame flaws. The good news is that Rokinon / Samyang /Bower lenses have taken notice of the astrophotography community’s needs for low Coma and Astigmatism when they developed their line of inexpensive all-manual prime lenses. The amount of coma in the $400 Rokinon 24mm f/1.4 wide open is significantly better than the Canon EF 24mm f/1.4L costing 3x as much, or the 28mm f1.8. The trade off with these inexpensive lenses, unfortunately is quality control in addition to their full manual operation. It is possible to get bad examples of these lenses so I suggest buying new so you have a warranty or at least locally where you can test out the lens.  Long story short, do your research before you head into the great dark unknown and you’ll have less to worry about and better photos when you return.