The Pacific Northwest is known for many natural wonders, and its abundance of flowing, cascading, and plummeting columns of water is right near the top of that list.  Any Google query for “Waterfalls” and “Pacific Northwest” is going to come up with an endless number of photos and lists of locations and descriptions.  One such list that I used when starting to put together my itinerary was “The 100 best waterfalls of the Northwest“, also relying on print material such as “Photographing Oregon” available on Amazon.  as well as specifically targeting the Columbia River Gorge information on its array of sights.

Shooting waterfalls have a few inherit challenges that one must overcome to get the best shots.  First is preserving the sense of scale.  It’s quite easy for 400 foot drops to be reduced to feeling like a step off the curb if not careful.  The second is getting the shutter speed right.  There are is a “no man’s land”, if not two, when shooting moving water.  Of course with varying speed of water, these zones of shutter speed shift somewhat.  Third is what to do about the sky and the light.  Waterfalls are often in hidden away places, so shooting when the sun is out will result in lots of very high contrast spots where bright light gives way to deep shadow almost on a knife’s edge.  On the other end of the spectrum is overcast days, when the light is very much more uniform, but aim your camera as to where it includes the sky in the frame and good luck getting anything but pure white (or equally uninteresting flat dull gray).  The last problem is that to get the most compelling images, you’re likely going to eventually get up close and personal with the water – and so is the camera. 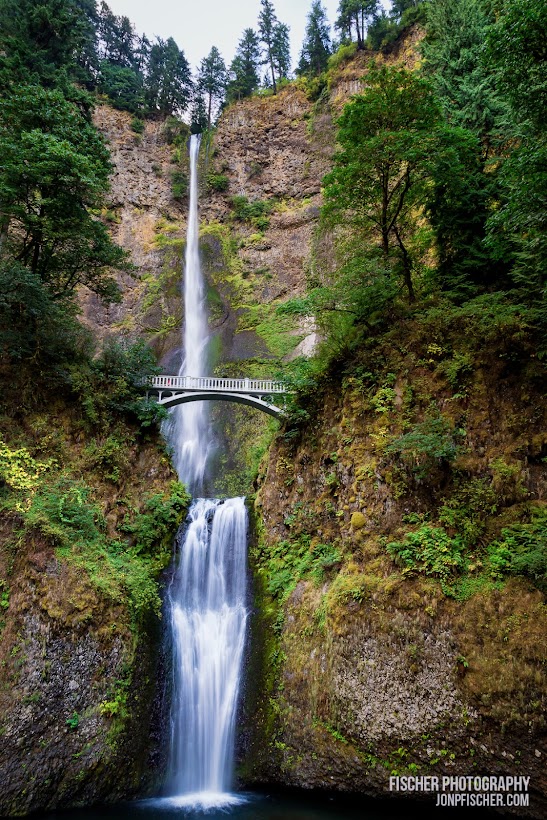 Multnomah Falls – 620 ft from top of the gorge to the lower pool.

This is a shot where the sense of scale is not quite as impressive as it was when I was standing there in front of it, straining my neck to see the very top.  While there are some elements in the frame to help keep the scale somewhat grounded, they are all things where they themselves are not very well scaled.  How big is the bridge, how big are the bushes, and those trees at the top – 5 foot saplings or 50 foot giants?  The very wide-angle lens is also not helping, as is the fact that the falls sit back a little from the rock faces that push out some on either side.  The larger trees on the edges, distorted some from the wide-angle view, seems to compress the scale of everything in the middle.  Also to note, is the sky, yup, almost pure white to start, tried to save some, but flat gray cloud is flat gray. 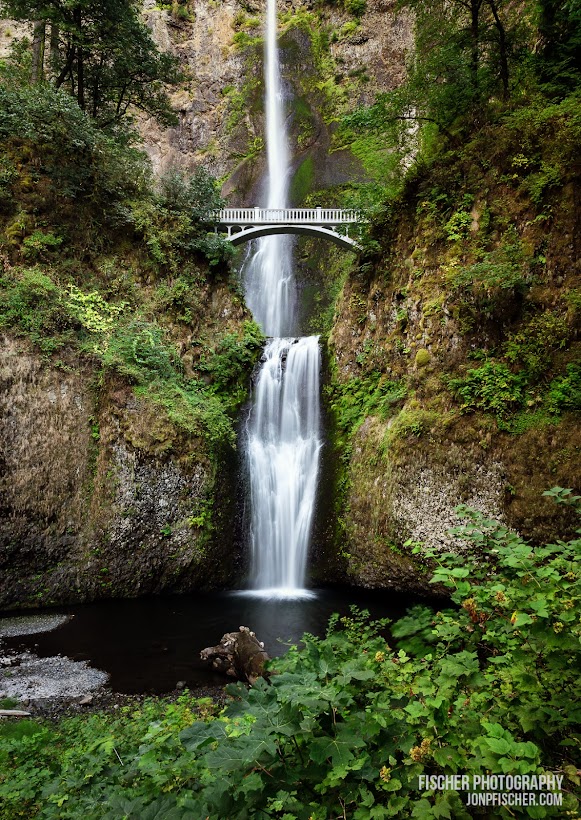 Stepping back a little, putting something in the foreground and giving up on the very top reaches of the falls worked far better overall.  A better sense of scale, and no sky to fight with.

The shutter speed “No Man’s Land” is a problem I’ve fought with in every moving water shot I’ve ever taken.  Starting from the fast end of the shutter, you have lengths that will freeze the water and put on display the shapes of crashing or curling waves in the surf, or the spray off a rock jutting out into the stream of a waterfall.  Then there’s the no man’s land where there is some blur, but not enough to make it look in motion, just not in focus either.  For waterfalls, normally that’s really the only gap you have to worry about.  If it’s a gentle cascading waterfall, there may also be a spot between ‘movement’ and ‘silky streams of water’, but the faster the water moves the smaller this gap seems to be.  I find this to be a problem much more often when I was shooting waves and surf and flowing streams than waterfalls.  In general, I find that shutter speeds somewhere around 1/200th up to about 1/30th is where this no man’s land exists.  Again, speed of the water flow changes this considerably, but if you’re in this zone, it is wise to zoom in on your first few shots to see what the water action looks like up close. 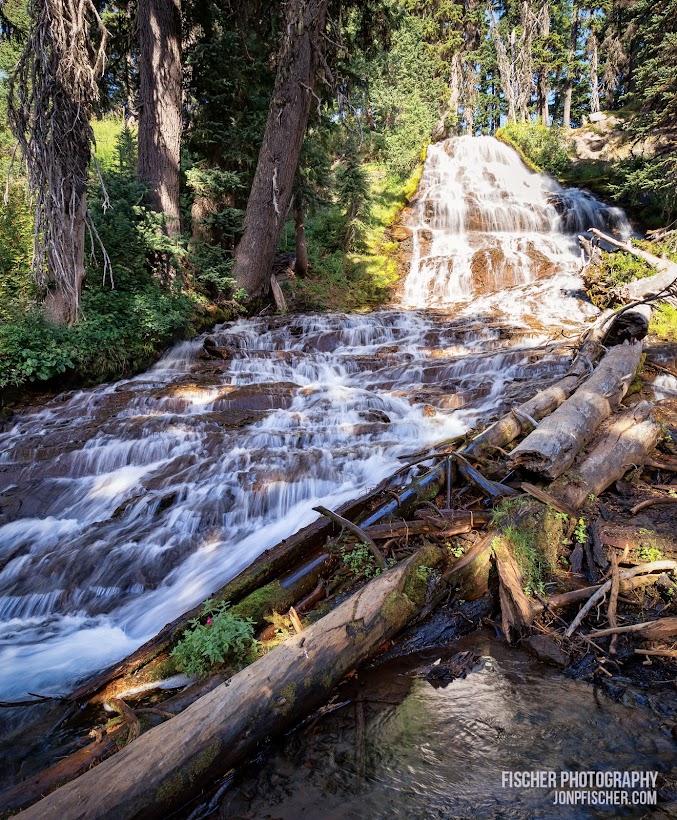 The above shot was taken at 1/10th of a second. For the fast-moving cascade, I was still able to capture plenty of water movement, but I probably wouldn’t have wanted to go much slower.  The frame below was shot at 1/5th of a second resulting in a better feel for the water flow.  Another one of my listed challenges – bright beautiful mid-day sunshine.  In the bright light, the “no man’s land” moves some, those silky bands of water can become bright blobs of overexposed trouble in a hurry. 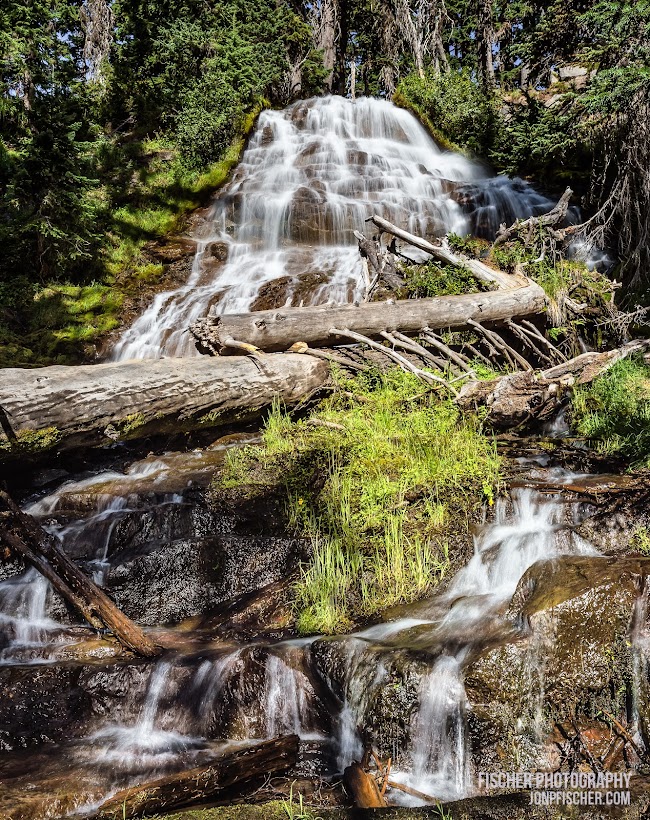 If you can’t get the entire waterfall in constant light, limit your shots to sections with some unity of light and shadow. 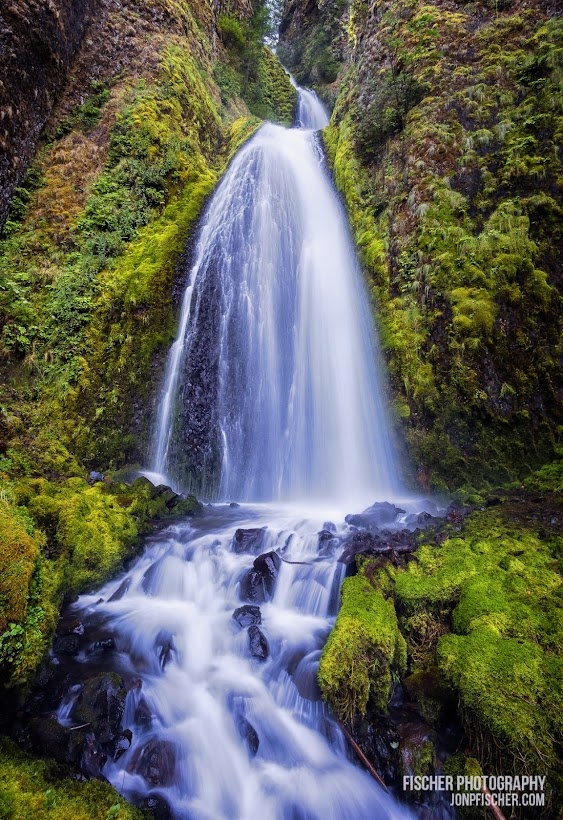 The above shot is probably when the camera got the wettest, and there were plenty of other opportunities for shots that I opted against that could have been a drenching.  Waterfalls throw off a lot of fine mist at the bottom, even 10 feet away you can feel some, and if you can feel it, so will the camera.  I shot a lot of the time with an ND filter attached to get the slower shutter speeds I wanted, but even when it wasn’t called for, I made use of a UV filter solely for the ability to wipe down the filter instead of the front element of the lens.  Most of the time I don’t bother with UV filters, but I bought one specifically for this trip, and I am happy I did.  Ended up wiping off the glass after every 2-3 shots, turning so my back was to the spray, getting the camera dried off, turning back composing as quickly as I could and firing off a few more. 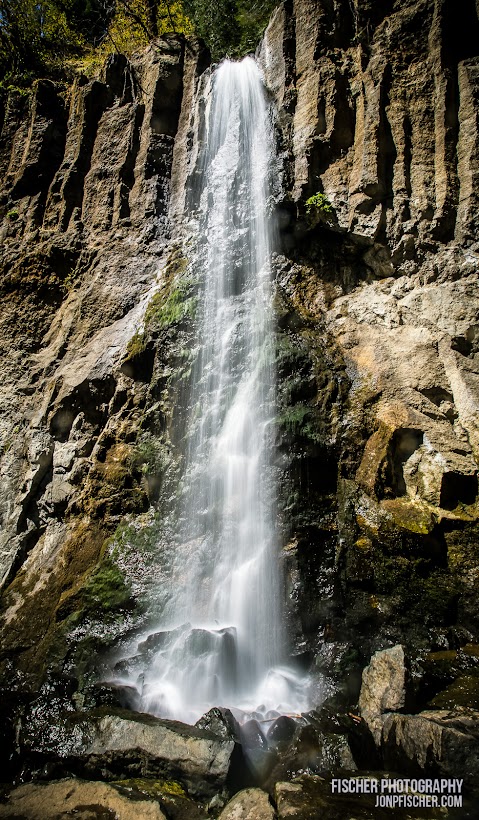 As a Texas native, my opportunities to shoot waterfalls is fairly limited.  So it’s no wonder that the first waterfall I visited, Drift Creek Falls near Lincoln City, Oregon – was also the one which I had the most problems shooting.  First, scale, especially in the shot above, is completely lost. The bright blue skies made getting good compositions difficult, meaning lots of cropping in, which in turn is what caused the loss of scale.  Add in the fact it was also a warm day – thus making the location a popular spot to cool off at the end of a mile and half hike in.  The hike itself is beautiful, and I recommend it for anyone in the area.  There is an epic rope bridge spanning the last length to the drop down to the falls.  Still waiting to see if I can rescue any of those photos as none made the ‘first pass’ cut. 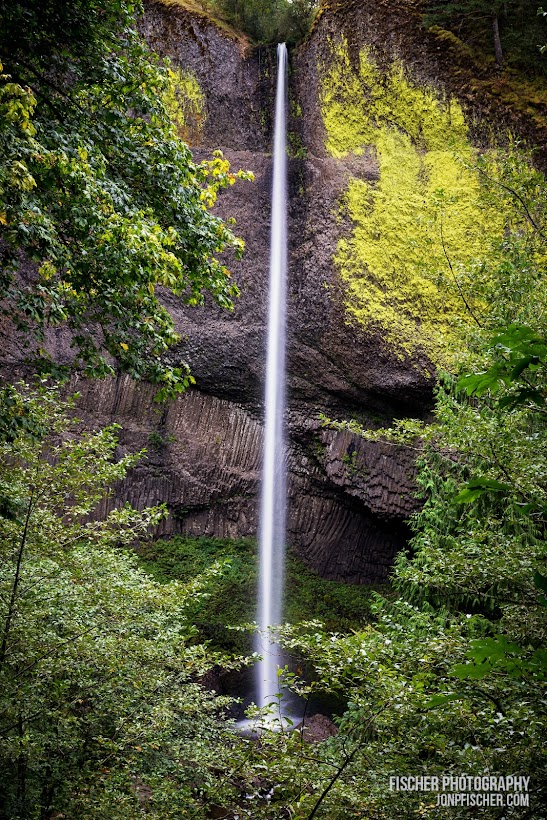 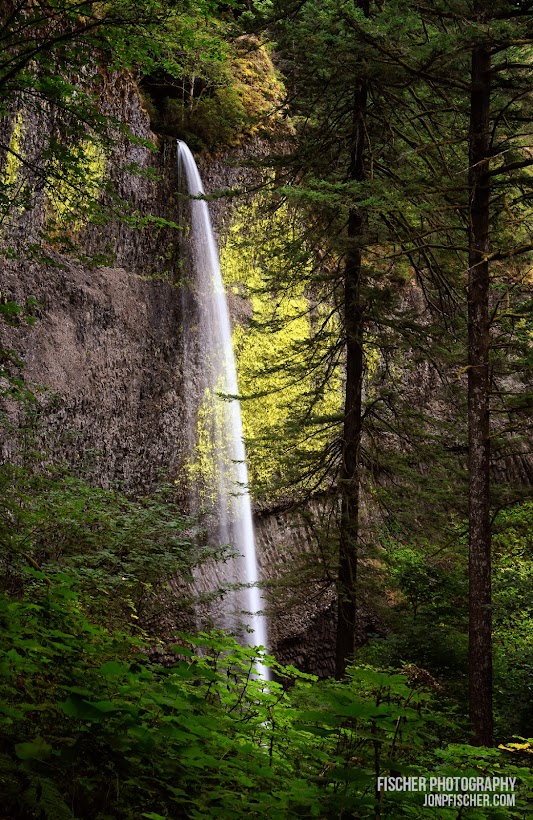 The only falls I went back to, in order to “get it right”, Latourell Falls was the hightlight of my waterfalls during the trip.  The initial 249 ft drop and subsequent flow through rocks and under a foot bridge simply took my breath away.  It was also where I learned one of the most important tips for shooting falls and dealing with the annoying sky.  Get Up High.  There’s a lot less sky to contend with when shooting from a level that puts you up above the base of the falls.  While getting down low in the middle of the base pool of the waterfall offers some great compositions, if the sky is working against you, this is what I found works best.