As eluded to in the first post (Cleburne State Park) in this series covering my spring photo trip, Dinosaur Valley State Park was my actual intended target for my first stop along my route through Texas.  Unfortunately I was unable to get a camping site at the park, however I did do a quick drive through the camping area and found the area to be quite nice and certainly on my list for a future weekend or longer camping trip.  If you’re looking for a State Park to visit within a couple hour’s drive of anywhere in DFW, it’s certainly not one to pass up. 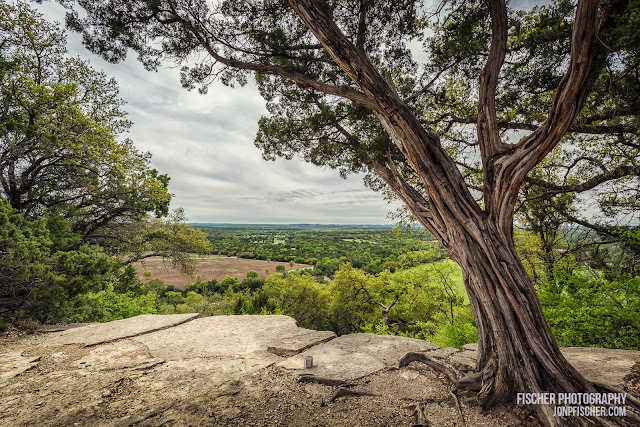 While it is the dinosaur tracks that give the state park its name, and one of its biggest draws, it was not in fact the focus of my visit.  I did capture a few shots of the prints, but they are something to experience and stand next to more than to view in a photo.  Somethings just don’t translate into photographs, or at least, I’m not skillful enough to make them translate well enough to make a suitable statement.  What did interest me was the Paluxy River flowing through the park, and the many hiking trails snaking along its shore and into the hills beyond.  The Texas State Parks site for the park states that there are over 20 miles of trails throughout the park.  After reviewing the State Park Trails Map, I selected a route that would allow me a mix of overlooks, river views and a good test of my hiking legs.

Arriving at the park mid-morning I knew I was far too late to really get the golden hour light along the river, so opted to snap a few shots of the wildflowers (primarily Bluebonnets and Indian Paintbrush – more on these in a bit) before heading for the trail head.  Most of the trails are on the opposite bank side of the river from the park facilities and roads, which means getting across it.  The trails are often closed due to high water after rains, but thankfully the river was low enough for safe crossing when I visited.  Starting off on the Cedar Brake Outer Loop Trail – from which all of the other trails branch once it crosses the river – I picked my way across the large stepping-stones across the river and ventured into the wooded hill side beyond.  The trails here are a mixed use hiking and mountain bike trail, so you do have to be aware of faster moving cyclists while on the trail and when choosing where to stop for photo opportunities.  The trail is a fairly wide single track, close enough to feel as you’re actually on a trail and not on a ranch road, but good enough visibility to avoid cycling traffic.  From the Cedar Brake Outer Loop, I branched off first to the Denio Creek Warbler Trail and then onto the Black-Capped Viero Trail – with high hopes of what the ‘Wildcat Hollow Waterfall’ might entail.

Highlight of the hike was probably the Paluxy River Overlook (#6 on the trails map).  I had visited this overlook via a different route during my last trip so I was having a slight feeling of deja vu as I was approaching the overlook and seeing the view for the first time in several years.  I finished the loop via the Paluxy River Overlook Trail.  This is a ‘Hiking Only’ section of trail – meaning the terrain gets steeper and tighter.  Not bike friendly, but a very nice hike if you’ve got decent footwear.

Dinosaur Valley State Park is a landscape and nature photographer’s dream if there is one in North Texas.  Sure the river could be a little deeper with more flow as I would find later on the Pedernales River, but the beautiful deep waters at the Blue Pool to the shallow streams slipping between stepping-stones at the crossings – the Paluxy River has great access along much of its length through the park and the shallow sections are easy to wade into for center-flow compositions. 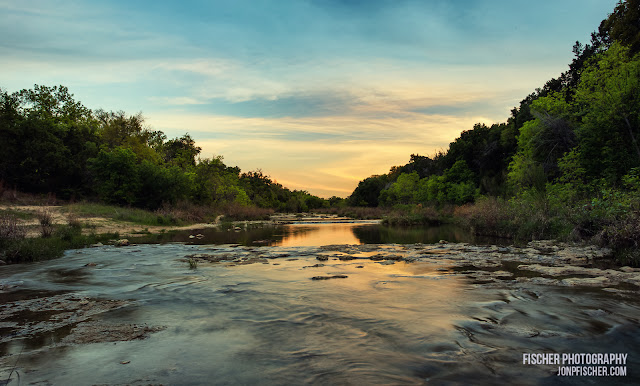 The high bluffs line the river on the north side through most of the curve of the river as it flows through the park, meaning the sun is blocked well before sunset (and after sunrise) when at river level.  If you want that brilliant sunstar in frame at those dawn/dusk moments, you will have to plan accordingly or plan to shoot from one of the overlooks and hike in/out in the dark. 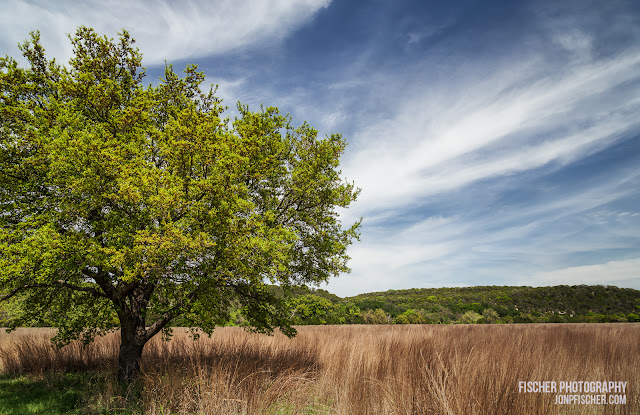 There are several wide open fields in the park.  One is near the parking lot for the Blue Hole – high dry grass looked great against the vivid greens of the trees and new spring plants making for some nice compositions – and would work well as a portrait background as well.  The other nice fields are along the Equestrian trails and the south-west end of the Cedar Brake Outer Loop near the Blue Hole.

In spring, Dinosaur Valley State Park is host to beautiful displays of the popular Texas wildflowers – namely Bluebonnets and Indian Paintbrush when I visited, later in spring more yellow hues will start to replace the blues and reds. 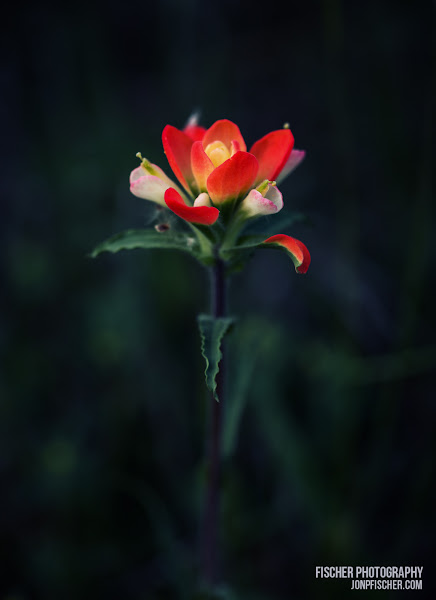 Of course not to be missed during a visit are the two huge dinosaur statues, prominently displayed a short drive from the headquarters and next to the park store.  These could look great lit up at night, or with big thunderous storms in the background.  Those shots will have to wait as the weather was quite pleasant the entire time I was in the park.

As mentioned above, getting photos of the footprints is a necessity, but getting a creative, let alone artistic looking shot is another matter all together.

I encourage everyone, photographer or not, to consider a trip to Dinosaur Valley State Park.  Be it for a hike, to fish or eve swim in the Paluxy River, to reconnect with the child inside at the wonder of the Dinosaurs that once roamed these lands, or simply to find some peace away from the daily grind.  With many more miles of hiking trails to explore and more of the river to capture with my camera, I look forward to my next visit.