Old Car City, USA had been on my list of locations to shoot if I ever made it to Georgia for quite some time. Having first learned about the junk yard turned automotive photography heaven while watching a video on KelbyOne some time ago, it had been in the back of my mind as quick trip destination ever since. My opportunity finally came up in February of 2016. Read more about Old Car City in my article in the Travel section.

During my shooting time at Old Car City I focus on two focal lengths and lenses. First being the exceptional 100mm f2.8 Macro (non-L version) and my 50mm f/1.4. The 50mm with its fast maximum aperture is an excellent ‘normal’ length portrait lens, and is useful for portraits of more than just people. Stopping down just a little to ensure good sharpness and just a touch more depth of field than at wide open, most of my shots taken with this lens at Old Car City were at apertures around f/2 to f/4 depending on the light, distance to subject, distance to background, and desired effect of shallow DOF.  At f/2.5 and ISO 200 the shutter speed was plenty high for hand-held shooting, allowing me to quickly move to different compositions while looking through the view finder to get just the perspective I was after.

The front end of the Edsel is an iconic shape that is ingrained, for better or worse, in the minds of many fans of classic american automobiles.  I knew I didn’t need anything more than the tall center stack of the radiator grill for viewers to recognize the car, but chose to step back just a bit and get more context of the overall scene with the hood ajar, flanked both top and bottom by piles of pine needles.

Most of the photos I have processed from Old Car City have followed a fairly consistent processing workflow.  After initial adjustments are done in Lightroom, the photo is exported into Photoshop for the remainder of the processing work.  After any distracting elements are removed by using the healing brush or content aware fill, an B&W layer is created in Nik Silver Efex Pro 2.  Once I am happy with the B&W rendering, that layer has color added back to it through one or more layers of the original color photo.  In this case I also added a Soft Light layer with some additional color brushed in to pump up the colors in a few spots and help shape the shadows and highlights.  I have a tutorial for this process posted here (Gritty Color). 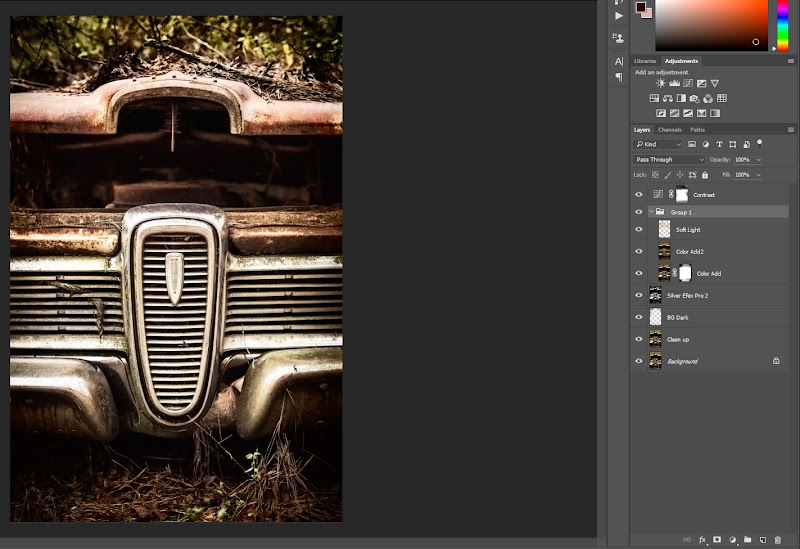 The image above shows each of the Photoshop Layers described above with the additional layer ‘BG Dark’, simply another empty layer set to Soft Light which then had a dark brown hue painted in at the top and bottom creating a vignetting effect to the ground and background brush above.  In this photo I split the color adding step into two layers, the first is masked out at the top and bottom so that the majority of the color is only added to the car, the second I added a soft blur to the color layer to soften the transition of hues.  This caused a more faded and antiqued look to the final image.

Below is the B&W layer created in Nik Silver Efex Pro 2.  The Nik software package is used in some way/shape/form on nearly every one of my photos.  I actually liked this B&W version as-is enough that I saved off a copy of just this layer to be added to my album from the trip. 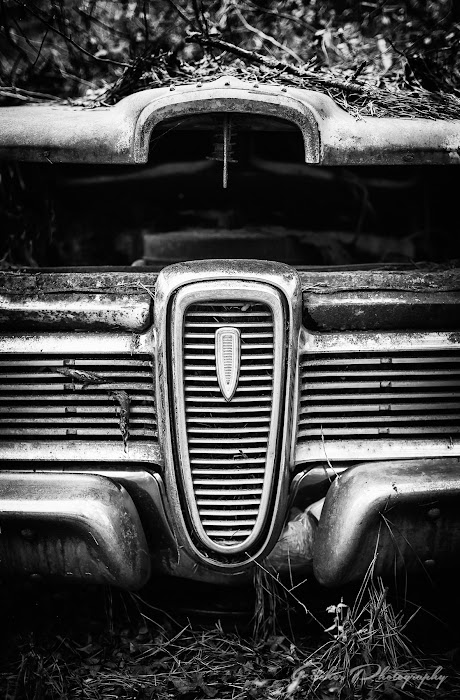